Stun guns are legal in most states, though not all. If you need protection but don't want to carry a pistol, a stun gun is a great alternative. Most states don't require a permit to carry a stun gun.

If you're often in unsafe areas or in need of protection, consider investing in a stun gun. 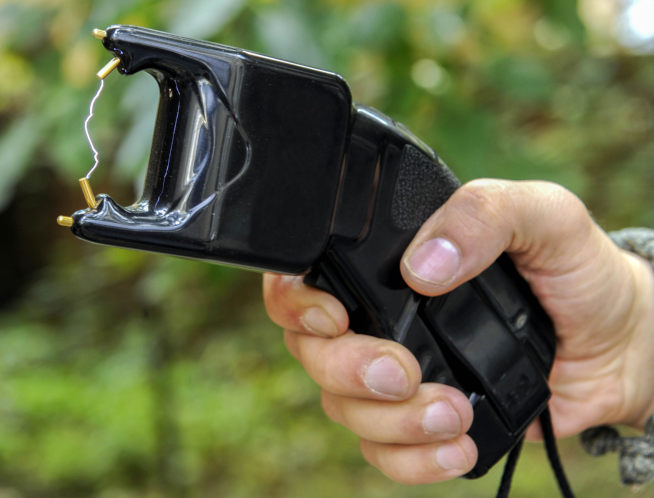 There's lots of confusion about voltage and amp ratings on stun guns. Read on to learn more before you get your stun gun.

Although some people use the words stun gun and Taser interchangeably, they are not the same. Both Tasers and stun guns are electroshock weapons. The biggest difference between the two is their range.

You can shoot a Taser from a distance. But a stun gun must come into direct contact with your attacker. Both weapons deliver a stunning shock designed to give you time to get away from your attacker.

It's actually the amps providing the energy rather than the voltage. The voltage gives the prongs the ability to penetrate clothing. The higher the voltage, the better the charge delivery to the target.

In reality, one amp is enough to cause a fatal heart irregularity. Stun guns are not designed to deliver a fatal blow. The amperage in a stun gun is measured in units smaller than amps - called milliamps.

Most stun guns are between 3 and 4 milliamps.

If you've ever been shocked by a doorknob after rubbing your shoes on the rug, you're familiar with volts. The doorknob shock delivers between 20,000 to 30,000 volts of electricity.

Get the Proper Milliamps

When looking for the right stun gun, get something between 3 and 4 milliamps, but not higher than 5. If the stun gun is over 5 milliamps, the circuitry will overload causing the capacitor to burn out.

The stun gun has probes on the end. These must touch your attacker for the stun gun to work. Anywhere on the body will cause pain. But it's best to get your attacker in the neck, upper body, or groin.

Those areas have major muscle groups and are more likely to stop your attacker. The shock is designed to cause muscle contraction and pain.

Most stun guns come with rechargeable batteries. Don't forget to recharge your stun gun every couple of months.

Stun Guns Are the Perfect Alternative

If you're looking for some self-protection and don't wish to carry a pistol, a stun gun is a perfect alternative. Its small size makes it easy to carry. Stun guns are legal in most states, but check your city and state laws before buying one.

Are you ready to make your stun-gun purchase? Click here.