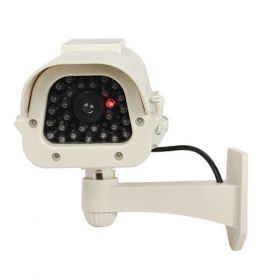 A solar powered dummy camera is the perfect way to deter thieves and intruders while filling out the rest of your security network. While they may not record footage, a dummy camera makes an intruder believe that he or she is being filmed. This reduces the likelihood that they will follow through with their illegal activities. This is an affordable way to fill out your other cameras or security measures to create a full network.

For a dummy camera to be effective, it has to look and function like a real camera. That's exactly what this camera does. The camera itself looks like any other security camera. In fact, if you don't separate them from regular cameras, then you might confuse them with your other security devices. Not only does the body make it look like any other camera, but there's also a cord coming from the side and it has individual light diodes like night vision cameras.

Perhaps the only difference between this and a functional camera is that it has a flashing red LED. Unlike standard cameras that want to avoid detection and don't bring attention to themselves, the dummy camera wants to let intruders know that a security system is in place and they should think twice before doing something they'll regret. The light flashes to give the illusion that it's on and recording everything to improve security and deter intruders.

Not only that, but the camera consists of durable ABS plastic. This is the type of plastic used with most security cameras. Plus, it can take a hit and withstand wind and the elements with ease. You can choose between an off-white color or black for the camera's body.

Another useful feature is that the camera is solar powered. We've included two AA rechargeable batteries that power the camera 24 hours a day. The solar panel will recharge these batteries, ensuring the camera works indefinitely. As long as the batteries can maintain a charge, the camera will be able to stay on and add to the effectiveness of your security network. This provides you with 24/7 coverage and the camera will never turn off.

The dimensions of this camera are 8" x 7" x 3", which is exactly the same as many other security cameras. Unlike some other dummy cameras that only somewhat resemble regular cameras but are a weird or unconventional size, this one is perfectly disguised. Dummy cameras only work if they fool the intruder, and our model definitely has that covered.

While enhancing security is a major benefit, we have a few others for you. Dummy cameras are much more affordable than standard security cameras. That's not only the unit itself. Running a standard camera uses more power, a system to store the recordings, and networking costs to ensure everything works. This results in substantial costs that continue to grow the more cameras you get. A dummy camera is less expensive and doesn't require more money for continued operations.

Another major benefit is they're easy to install. As stated above, standard security cameras need storage, networking, and power. That's a lot of effort to install a camera. Even the easiest ones require a fair amount of time and effort to make sure they're working properly. This dummy camera is different. Screw it in wherever you want and that's it. It takes a few minutes until the camera is in place and ready to start deterring criminals.

Some of these solar powered dummy camera benefits are:

If you want to improve your security network and make potential intruders think twice about breaking in, then this dummy camera is perfect for you. It looks like a standard camera and can run indefinitely without an outside power source. Not only that, but the ABS plastic is durable and will withstand the elements with ease. Get yours today to protect your home or business.