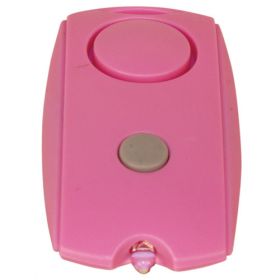 The Mini Personal Alarm LED Flashlight with Belt Clip can be attached to a keychain. It has a very sleek and compact design, but don’t let its small stature fool you. This easily activated alarm will emit an ear piercing 120dB alert that will send your aggressor fleeing for the confines of a sound proof room.

You can deactivate this alarm just as easily as you activated it, with the click of a perfectly located button.

This alarm fits easily in your pocket, purse, can be clipped onto your belt, or attached to a key chain. The built in LED flashlight allows you to shed some light on any situation.

Anyway you chose to carry it, it will be nothing but beneficial to your safety. Uses 3 replaceable LR44 batteries (included). Available in 2 colors Black and Pink.

Increase Your Level of Safety at Night

We live in a world that holds various dangers, especially for anyone walking after dark. Many people have been attacked as they walked through a dimly lit or dark area. Sometimes the assailant is intent on robbing the person who is alone, and other times the attack is sexual in nature. Whatever the reason, the victim can be seriously injured or even lose their life.

There are very few people who feel comfortable carrying a weapon to protect themselves, and this is not even legal in many states. Perhaps the most effective method of protection is to carry a personal alarm that also has a built-in light to illuminate the surrounding area.

Individuals who have this small and inexpensive device attached to their belt or keychain have the option of depressing the alarm button if they feel threatened by the presence or approach of someone they sense has evil intentions. When activated, the keychain alarm emits a loud 120 decibel alarm that is loud enough to discourage a would-be attacker and alert other people in the area.

While the alarm will likely deter a would-be robber or rapist, it may be wise to add an extra layer of protection. In the event that the threat is from a wild animal, animal repellents are available as well. Several varieties of pepper sprays, knives and stun guns can also be found at this online store.

Individuals who work at a job that requires them to keep nighttime hours often end up walking from their vehicle through a dimly lit parking lot, so they will likely appreciate the feeling of safety found in carrying a personal alarm. Most attacks happen under the cover of darkness, so this little alarm with the built-in LED light helps to prevent occurrences.

Although joggers are discouraged from following a wooded path through a city park, many people make that choice anyway. They are probably thinking nothing will happen to them, especially during daylight hours. Unfortunately, attacks have happened in this kind of setting, mostly by humans but also by animals. The loud alarm produced by the mini keychain alarm will probably be enough to deter any attacker, and the jogger can continue their workout or quickly return home.

Women seem to be the victims of late night crimes more than men; probably because they can be physically overcome easier. Females who end up walking to their car after dark, or those who have a daily run along the same path are more at risk than men. The mini personal alarm is available in pink for those women who prefer that color over black. These devices are not meant to be a fashion statement, but some women might be more likely to have one than if they were only available in black.

Whether in an urban or rural area, it is important for people to protect themselves. One never knows who or what might be lurking in the dark.