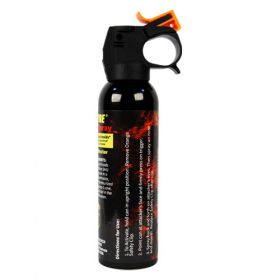 The WILDFIRE® PEPPER SPRAY is hot, hot, hot. The Major Capsaicinoids are the true heat measure. WildFire has the hottest on the market at 1.4% Major Capsaicinoids. In addition to causing an attacker pain, WildFire 10% oleoresin capsicum formula swells the mucous membranes, which makes breathing difficult, and swells the veins in the eyes, causing the eyes to close.

The 9oz model is great for crowd control, military, correction, security and law enforcement officers. Great for civilian use as well. Approximately 38 one second burst and a range of 20 feet.

These units are the units used by most police officers for maximum coverage against multiple attackers.

Pepper spray cannot be shipped to New York or Massachusetts.